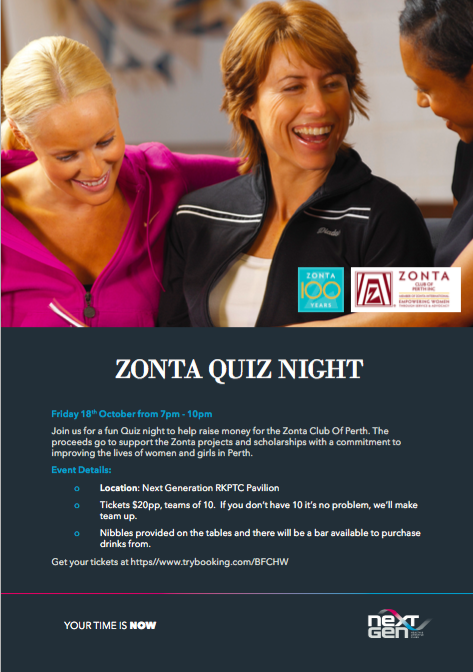 Join the Zonta Club of Perth for a fun Quiz night next month with the support of Next Gen Kings Park.

When? Friday 18th October 2019, 7pm – 10pm
Where? Next Gen Kings Park, RKPTC Pavilion
21 Kings Park Road, Kings Park WA 6005
What? An evening of fun, fellowship and support for projects and scholarships improving the lives of women and girls.

Nibbles provided on the tables and there will be a bar available to purchase drinks from.

Any questions, please let us know via zontaperth@gmail.com 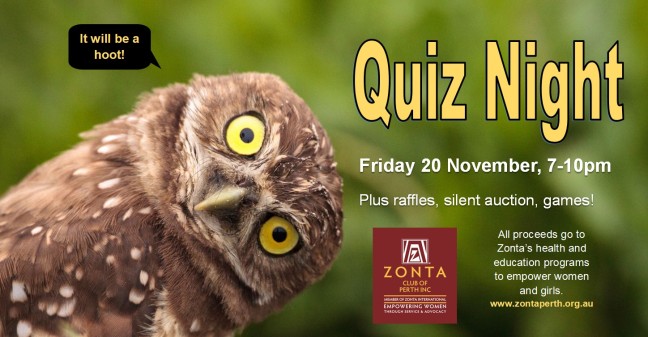 Test your wits at the Zonta Club of Perth’s fundraising Quiz Night on Friday 20 November!

This evening of fun and games will be held from 7-10pm in the Shenton Park Community Centre, 240 Onslow Road, Shenton Park. Thanks to Covid-19, tickets are limited and there will be only six people per table. Bring your own nibbles and drinks.

With a quiz, raffles, silent auction and games, there will be plenty of ways for you to spend money and help Zonta’s projects!

Tickets $20 each via Humanitix

Why is it that women find it so hard to break through the glass ceilings in STEMM careers? Could it be the harassment, sexual abuse, the culture that places competition above collaboration, the lack of diversity or being ignored?

The Leadership is an independent documentary that follows female scientists on their leadership ‘Homeward Bound’ journey to Antarctica. The film’s preview and Q&A session in Perth, drew a full house – and included members from the Zonta Club of Perth. The audience was inspired by the personal journeys of the scientists and their leadership team in the film and left the event thinking about how the lessons learned from the ship can translate into our own lives.

The movie is being launched nationally in October and is well worth a look. Check out Homeward Bound for more information.

Judy Gorton is the highest ranked Zontian in our club’s 48 year history. She has been the leader of our Club, our Area and District 23. In the last two years she has served as a Director on the Zonta International Board overseeing the administration and service activities of Zonta at the global level.

At the September meeting, Club President, Mary Gurgone (pictured left) presented Judy with an orchid in appreciation of her international service to Zonta.

Judy described the highs of attending board meetings face-to-face at our Chicago headquarters and the privilege of representing the Zonta International President at district conferences in Sweden, New York state and Hawaii. She was inspired by the commitment of the founding Zontians as well as current members around the world.

The most challenging aspect of her role was having to operate at her best in the early hours of the morning as most of the Board meetings were held online in Chicago time!

Members are very proud of Judy who has been a great ambassador not only for our club but also for Zontians throughout Australia.

However, there is no time to rest on her laurels as Judy is currently the District 23 Centurion – a position that enables her to share her leadership experience. She is also a founder member of the District 23 Zonta Says Now to Climate Action think tank, forging a way to help women in the future.

Thank you Judy for all you have done – and continue to do – for Zonta. 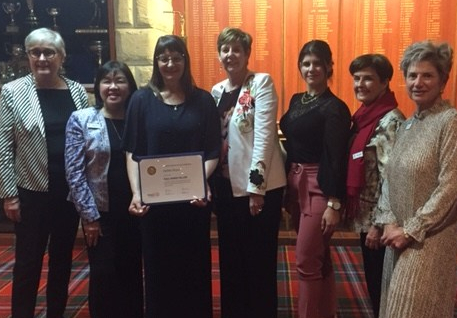 Club member, Deb Mason, was honoured at a Rotary Club of Como event on 29 August when she received a Paul Harris Award for her magnificent contribution to helping families in crisis.

Deb established a charity called Starting Over Support (SOS) to provide furniture and household items to women leaving refuges – so that they could start their new lives with a furnished home. Over the years the program expanded from a shed to an industrial unit – from using cars with trailers to having a furniture truck funded by Lotterywest.

Deb worked tirelessly with SOS and has helped put hundreds of families back on their feet in times of crisis. Congratulations Deb – a well deserved honour!

Do you know a woman who has gone ”above and beyond” to help others in her community or profession?

A woman who has not been previously recognised by an award at the state, national or international level – but whose achievements you would like to see recognised?

If so, the Zonta Club of Perth would like to hear from you!

We are seeking nominations for our 2020 Zonta Club of Perth Woman of Achievement Award.

This prestigious award is offered every two years. The successful awardee will be recognised at a special lunch event in Dunsborough on Saturday 7 November 2020.

Applications are now open and close on 5 October 2020.

Zonta International is a human rights organisation committed to empowering women worldwide through service and advocacy.

Zontians say YES to gender equality and NO to violence against women.

Find out more about the Zonta Club of Perth.

In these days of Covid-19 social distancing requirements, our Birthing Kit Assembly Days have had to be re-worked. We have replaced our large events that involved dozens of volunteers assembling hundreds of kits – with mini assembly days in member’s homes and workplaces.

We can all keep socially-distanced, yet still experience the satisfaction of providing hands-on service to help women around the world.

If you would like to know more about the birthing kit program, visit Kit International.

At our August meeting, guest speaker, Gracia Mukiibi, shared memories of growing up in a large family of 13 children – and how the family survived one of the world’s bloodiest conflicts in the Congo and sought refuge in Australia.

Gracia is a contributing author in a book called – A Mile in Our Shoes that brings together the stories of nine high achieving, trailblazing women from around the world.

Gracia read excerpts from her part of the book and inspired members with her passion, drive, and grace. She is the consummate advocate for empowering women – she gives voice to the women who are oppressed, violated, sold as commodities, forced into early marriage – and those who have lost their lives in pursuit of equality.

She quoted an African proverb, “If you go alone, you’ll go quickly – but if we go together we’ll reach further” – a quote that beautifully captures the philosophy of Zonta’s collaborative approach to empowering women.

Thank you Gracia for sharing your story.

Angie Perkins, the fabulous Service Delivery Manager is leaving Zonta House after 7 years. Angie has made a significant contribution to the organisation, staff, volunteers, students and the women we walk alongside over this period. Angie has truly embodied and championed the Zonta House values of Care, Integrity and Dedication during her time with the refuge.

We are thrilled for Angie who will take on a new role working with youth and wish her the very best for her next endeavours in mid-September. Angie will continue to be dedicated to making a difference in people’s lives and contribute to a safer community. In the meantime the Refuge is continuing to focus on delivering high quality services to women and families it supports.

It also means that there is an exciting and rare opportunity to work with the refuge in a senior management role. Do you know someone who is dynamic and solution-focused to join the Refuge team in the Service Delivery Manager role. For more information please see the enclosed link https://www.seek.com.au/job/50327096

Applications close on the 21st of August. For a copy of the full Duty Statement please email info@zontahouse.org.au.

Kelda Opperman, the Zonta House Refuge CEO is happy to have a confidential discussion with anyone interested on 0429 008 911.

Please circulate this information through your networks.

Our July meeting was a face-to-face meeting at St Catherine’s College with some members joining online via Zoom.

We enjoyed a full smorgasbord dinner in the university dining room before taking our wine into another room for our ‘hybrid’ meeting with online members. The July theme was ‘innovation in a new world context’ – with lively discussion on how we progress a range of club initiatives.

A few days before the meeting, voting for the ZI Convention was undertaken online by our club’s delegate, Carole Theobald, with alternate Sandra Burns and also Judy Gorton, ZI Director. They created a ‘mini Convention’ discussing nominations and bylaws to make sure that voting reflected the Club’s preferences. They explained at the July meeting that this was the first time voting had been undertaken online by Zonta International and was a very productive, enjoyable process. Judy described how, in her capacity as ZI Director, she had organised the ZI Convention’s Memorial Service that can be viewed online. Members were reminded to view the Zonta talks including the Future is Women featuring 7 former ZI Presidents.

Congratulations go to Fatemah Etemadi who is the inspirational 2020 Zonta Club of Perth University Education Awardee.

At the June club meeting Fatemah described how she was born in Iran and spent much of her childhood in Afghanistan. Her father died when she was 12 and soon afterwards her mother bravely started a new life in Australia with her six children (3 girls and 3 boys).

Fatemah is studying Oral Health Therapy at Curtin University and in her spare time is a volleyball coach and bicultural facilitator. She helped to organise the largest blood donation group in WA as well as a fundraising run for the homeless. She is passionate about helping others especially cancer patients, disadvantaged children and vulnerable families. She intends to use her $2000 award towards the purchase of a laptop, loop glasses, dental instruments and a possibly a car!

Fatemah was joined for the presentation by her two sisters, Zahra and Marzieh.

Club members wish Fatemah and her sisters every success in the future studies!

The Zonta Club of Perth Inc meets on the second Thursday of each month at St Catherine's College, University of Western Australia.

Interested in coming to a meeting? Just drop us an email at
zontaperth@gmail.com
and we can save you a seat.